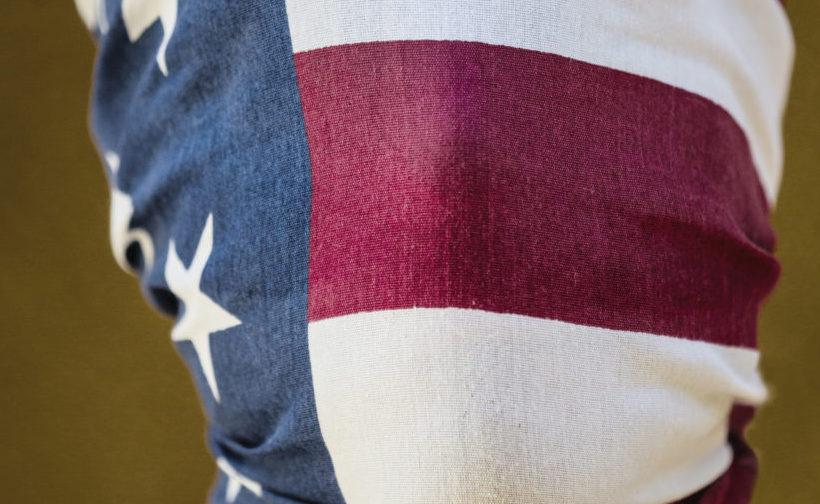 I fell out of love with America the day Trayvon Martin died on February 26, 2012. I’ve been trying to find my way back, ever since. I’d returned home from Afghanistan — where my soul first encountered hopelessness while serving as a medic in the U.S. Army — to the lynching of a Black child. Every bit of idealism I’d held about America immediately turned to dust, covering bullets meant for bodies I’d never see or know in a land far away. Flanked by America’s poor, dawning camouflage as patriotism, I became well acquainted with my nation’s particular brand of contradiction, and I became well-versed in the double consciousness of being a Black American patriot.

Trayvon’s death would be my critical awakening, although my process of unlearning had begun years prior at Morehouse College. This was the home I’d chosen as solace for my Black manhood. It was the place I first read James Baldwin, discovered protest, and held the hand of a man I’d come to love — where my roots were exalted and my potential made limitless. Freedom seemed possible, then, but it would become diluted along my journey.

In 2008, I canvassed Sanford, Florida — the same town where Trayvon would meet his end four years later. I was intent on helping secure a victory that would propel then Senator Barack Obama into the nation’s highest office. His election would be a catalyst to my enlistment in the Army. Serving under a Black President seemed like a worthwhile endeavor at the time. I’d later come to learn how idolatry can be a gateway to disappointment. Trayvon’s death, alongside an endless list of summary executions of Black men, women and children across this nation, would alter my outlook toward the land I served in uniform.

For me, Trayvon always comes to mind on the 4th of July as I try to resolve the juxtaposition of being Black in America with the expectation to put one’s patriotism on full display.

“Surely oppression makes a wise man mad,” Frederick Douglass noted from Ecclesiastes 7:7, in a speech on the significance of the 4th of July to enslaved Africans spread across the American landscape 166 years ago. The utter shame and hypocrisy that has colored the day from its inception remains unresolved. The barrage of human tragedy fueled by blatant racism, systemic bias and “othering” — both, past and present — compounds my recurrent bouts of depression. I struggle, like many, to bear the weight of history and align my purpose to meaning greater than the fulfillment of my own ambitions. Individualism, it seems, is what perpetuates much of America’s dilemmas.

My own mental health has forced a reconciliation with the abstract idea of America’s promise. I’m often left reeling from just how far we often fall short of that promise and the disparities and inequities that plague us as a result. The increasing pessimism and negativity distorting the values driving America forward can feel paralyzing to those with a capacity for empathy. Those of us who endure the whims of America’s shifting politics exist in a state of ceaseless anxiety. I understand the hopelessness it causes all to well.

But America isn’t only shaped by the summation of its politics — no matter the sway of the current political winds. It’s also formed by the enduring promise of its people. When I think of hope in America today, my one-year-old nephew Nezakiah comes to mind. I also think of his father, a man who America failed from birth — beset into poverty, robbed of opportunity, and placed on a path to incarceration long before he committed any crime. Thoughts on how his son will navigate fact from fiction to construct an identity pillared in possibility without a father’s presence pervade my mind. I fear whether I’ll be able to thwart the path America has set him on.

Still, Nezakiah has become the promise of America I cling to; a future both untold and unseen. I hold hope close for him and for his dreams, even if my cynicism can sometimes make that abstraction feel futile.

I weight all I’ve come to know about America against the backdrop of those who came before me, who — in spite of what they endured, willed freedoms far greater than the ones they’d known. What’s worth recognizing on the 4th of July is not the patriotism or liberties often propagated and seldom extended, but of the possibility manifested in the lives of those men and women. The same possibility that existed in Trayvon, cut short before he had a chance to see his dreams to fruition. And the same possibility that exists in my nephew, Nezakiah. He, too, is America. America is possible because he is possible.

My love for him is as close as I’ve gotten to falling in love with the idea of America, again. And perhaps that’s worth a celebration.